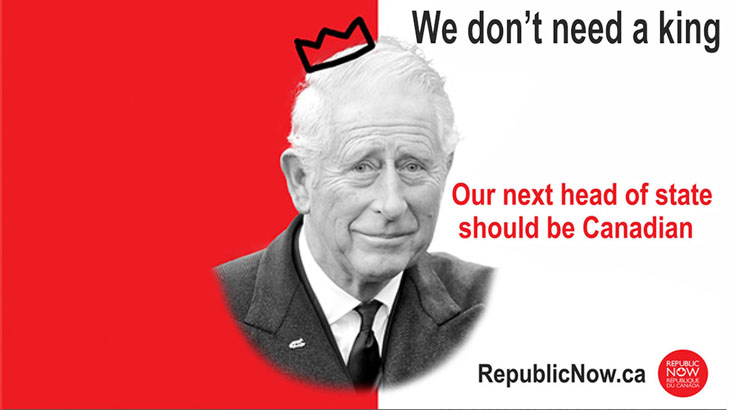 TORONTO, April 27 — The first ever ad campaign urging that a Canadian replace the British monarch as our head of state was unveiled in Toronto, today. Republic Now, a not-for-profit, non-partisan advocacy group, has placed banner ads on the sides of city buses bearing the message “We don’t need a king. Our next head of state should be Canadian.” The slogan appears beside an image of Charles, the Prince of Wales, who is in line to become king of Canada. The month-long campaign is intended to ignite discussion among citizens and government.

“We’re celebrating 150 years of nationhood, but our highest office has never been held by a Canadian,” points out Ashok Charles, executive director of Republic Now. The group’s mission centers on Canadianizing the post. “We deserve a head of state who shares our citizenship, and who is chosen democratically, on the basis of merit,” he adds.

Since Confederation, Canada’s head of state has occupied a throne in Britain, is required to belong to the Church of England, and has never made Canada their sole concern. Currently, the monarch heads 16 different countries. The ad campaign’s aim is to raise public awareness about our head of state, and prompt the government to Canadianize and democratize our highest office–something recent polls show a majority of Canadians already agrees with.

The campaign is being launched after a successful crowd-funding effort, and is planned to expand elsewhere. It follows news that Charles and Camilla are arriving for our sesquicentennial celebration this July 1st, another reminder that we have unfinished business as a nation. The banners, circulating on TTC buses, also come a week after Queen Elizabeth turned 91, as a warning that, if we don’t work now to achieve a Canadian head of state, we’ll soon be forced to borrow yet another British monarch.

“A century ago, this country saw itself as an outpost of empire, whose subjects wrapped themselves in Union Jacks,” points out Ashok Charles. “Since then, we’ve forged a great nation–one with its own citizens, constitution, flag and anthem. It’s time to take the final step and establish an office of head of state which is ours, and ours alone.”

Republic Now advocates a Canadian head of state — one who shares our citizenship, lives in this country, and is chosen in a democratic way.