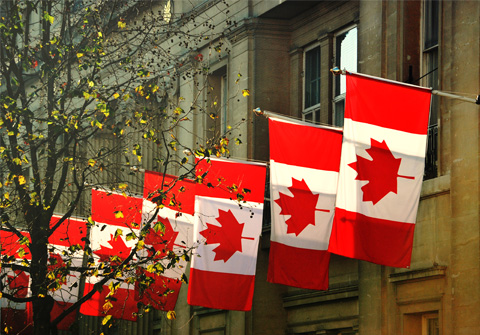 February 11, 2016 –Toronto    As the Canadian flag turns 51 this Flag Day (Feb. 15), we urge Heritage Minister Mélanie Joly to honour it by erasing a rule that disgraces our proud banner, and thereby all of us. A federal decree says the Maple Leaf is inferior to the personal flags of the governor general, the 10 lieutenant-governors, plus some 20 members of Britain’s royal family. The mere presence of any one of these people demotes the Canadian flag to a lesser flagpole or has it taken down completely.

“If the Canadian flag were hung below the US flag at Sunday’s NBA All-Star Game, there would be a national uproar,” says author Randall White of Republic Now. “This flag rule is worse because it’s not a rookie mistake, it’s bad protocol. It insults the flag and the nation,” says White. “The Canadian flag should always take first place in its own country.”

As it stands, our flag must be routinely removed nationwide, even on the Peace Tower on Parliament Hill–the one place it should fly at all times. Yet our colours are struck there and replaced by vice-regal and royal flags even on Canada Day!

The rule also causes embarrassing problems. On Feb. 15, 1965, the new national flag could not be hoisted above the Parliament Buildings at its own inaugural ceremony unless Governor General Georges Vanier left the Hill. Planners choreographed his departure so his flag could be lowered for ours to take its rightful place.

When PM Paul Martin honoured that same flag at a ceremony on the Hill, he talked of being inspired by the Maple Leaf on the Peace Tower. The crowd gazed up only to see the governor general’s blue banner, because Adrienne Clarkson was at the event. Awkward.
We think the GG’s flag–and each of the 30 or so personal banners–could still fly, but with the Maple Leaf in the place of honour.

Striking a flag is an act of surrender, so the optics of the current custom offend our true patriot love. The problem stretches beyond the governor general’s itinerary to those of the 10 lieutenant-governors. And it doesn’t end there.

The prime minister of Canada does not have a unique flag befitting the office (he should). But Prince Richard does. He’s the Duke of Gloucester in England, grandson of King George V–four monarchs and 106 years ago. Richard is 24th in line to the throne, but the Canadian government deems even his flag worthy of precedence ahead of Canada’s. That’s wrong.

Meantime, over the last four years, the government tasked the Canadian Heraldic Authority at Rideau Hall with creating “Canadianized” flags for British royals–Charles, William, Andrew, Edward, Anne–five in all…hardly Canadian, since they mostly use British templates. And, you guessed it, they eclipse the Maple Leaf, too.

A petition at Change.org to “Put the Canadian flag first” seeks to fix the flag faux-pas (see link below), and we hope a fresh look by Minister Joly will set things right. No law needs to change to achieve this, we understand. Yet it’s worth striking a line from the 1965 Flag Act which made the British flag our official symbol of Commonwealth membership. That was inserted to placate those who opposed the Maple Leaf in 1964. Since then, the Commonwealth has devised a flag of its own, free of colonial fetters, based on a design created in Ottawa in 1973. We should use that, instead.

Half a century ago, a Liberal government gave Canada a proud flag, and we hope the present ministry will make sure no banner flies higher. Says Randall White: “In this country, the flag of no nation, no group, no company or club, and certainly no person should be in a position superior to Canada’s.”

For its birthday, what better way to honour our flag than to accord it the place on the flagpole it already holds in our hearts — first.

Republic Now is a non-partisan, not-for-profit organization advocating a Canadian head of state — one who shares our citizenship, lives in this country, and is chosen by Canada in a democratic way.