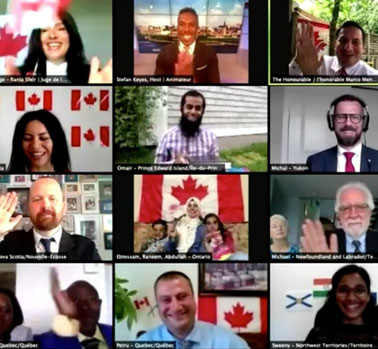 SPECIAL FROM ASHOK CHARLES, TORONTO/THUNDER BAY. APRIL 10, 2021 : Canada’s current citizenship oath, with its medieval pledge of fealty to a hereditary monarch, does not meet the needs of a prominent 21st century democracy.

In 2019 Canada accepted 340,000 new permanent residents, and is among the countries with the highest levels of immigration. Some 21% of the Canadian population is foreign-born — second only to Australia.

The top 10 countries from which we accept immigrants are India, China, Philippines, Nigeria, United States, Pakistan, Syria, Eritrea, Korea and Iran. Of these, at least half lack one or more of the following: multi-party elections, secularism, egalitarianism, press freedom.

Additionally, Canada is the world’s top re-settler of refugees and admits more people fleeing sectarian and ideological conflict than any other country.

It is fair to say that many of those who immigrate to Canada are coming from societies with conceptions of civil rights, freedoms, and responsibilities which are significantly different than our own.

When immigrants have fulfilled the requirements of citizenship, our citizenship oath represents our only opportunity to elicit a formal commitment in regards to how they will conduct themselves as full-fledged members of Canadian society.

It would be prudent to require a pledge to uphold democracy, egalitarianism, secularism and multiculturalism. Each of these principles is upheld by our Charter of Rights and Freedoms and, as such, they are fundamental Canadian values. We benefit when joined by newcomers who honour them.

Revising our citizenship oath to include a commitment to these values would also benefit potential immigrants as they encounter the oath when investigating Canada’s naturalization process and would see a succinct summary of the ideals which underlie Canadian society.

Unfortunately, we squander our opportunity to elicit a meaningful commitment from new Canadians by, instead, requiring them to pledge the following: “I swear that I will be faithful and bear true allegiance to Her Majesty Queen Elizabeth the Second, Queen of Canada, Her Heirs and Successors, and that I will faithfully observe the laws of Canada and fulfil my duties as a Canadian citizen.”

Considering that the British monarch is also the Supreme Governor of the Church of England, our current citizenship oath actually contradicts rather than upholds the values of egalitarian democracy, secularism and multiculturalism. And, in the second half of the oath, only the commitment to respect the rule of law is pertinent — a promise to fulfill one’s duties as a Canadian citizen is too vague to be meaningful.

Australia had an oath similar to ours but recognized its deficiencies in the early 1990’s and revised it to be relevant and useful. This is what Australia now requires new citizens to promise: “From this time forward, I pledge my loyalty to Australia and its people, whose democratic beliefs I share, whose rights and liberties I respect, and whose laws I will uphold and obey.”

When Canada revised its Immigration Act in 2002, to better reflect the post 9/11 world, it is incomprehensible that our citizenship oath was also not revised. This oversight is all the more perplexing when you consider that it is well-established that allegiance and faithfulness to members of the British royal family are not requisite of Canadian citizenship.

Those born in Canada, or to Canadian parents, are granted citizenship without having to pledge allegiance to the Windsors. Furthermore, I am a naturalized Canadian and my citizenship was not revoked — or even threatened — when I officially recanted the monarchical allegiance portion of the oath. I submitted a notarized recantation document to Citizenship and Immigration Canada as a way of highlighting my preference for egalitarian democracy over any form of monarchy, and to draw attention to the need for a revised oath. (In the same document, I reaffirmed my commitment to the non-monarchical provisions of the oath — despite the vagueness therein.)

Citizenship and Immigration Canada informed me, in writing, that my official rescinding of allegiance and faithfulness to members of the British royal family had not impacted my citizenship in the slightest. After my recantation, other naturalized Canadians have also disavowed the pledge of monarchical fealty without repercussions.

A superfluous, badly outdated oath is taking up space in an important naturalization protocol that should hold a commitment to Canadian values.

This is an oversight we cannot afford to ignore. Our citizenship oath could play an advantageous role in supporting national security objectives and helping to preserve social harmony but it is incapable of fulfilling these functions in its current form.

Happily, it is easy enough to change the current form of the oath with an ordinary act of our federal parliament. (Like the current independent Canadian flag — adopted by a vote of 163 to 78 in the Canadian House of Commons early on the morning of December 15, 1964.)

Ashok Charles was born in Madurai, Tamil Nadu, India. He spent his formative years in Thunder Bay, Ontario and is a graduate of Lakehead University. He then moved to Toronto where he graduated from Ryerson University in photographic arts, and has subsequently worked as a freelance photographer.

In the early 21st century Ashok became especially interested in democracy, the Canadian Charter of Rights, and the Canadian republican movement. He is now executive director of Republic Now/République du Canada, and can be reached at director@republicnow.ca. ; or #419-110 Cumberland St., Toronto, ON. Canada. M5R 3V5.