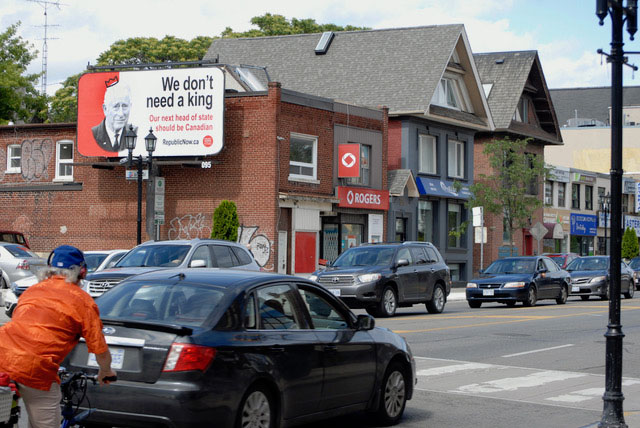 Republic Now’s main initiative, in 2017, was the implementation of the No King Charles of Canada public advertising campaign.

The campaign arose from the perspective, based on extensive discussion among Republic Now’s executive, that our organization has a responsibility to draw attention to the lack of proactive planning, on the part of the Canadian government, in regards to the upcoming transition in our office of head of state.

We find it unacceptable that the federal government is content to passively accept a new head of state, for life, to be assigned based on the coronation of the next British monarch.

In 2017, Republic Now launched Canada’s first republican public advertising campaign to spread the message that “We don’t need a king. Our next head of state should be Canadian.”

The No King Charles project started with a fund-raising campaign, on gofundme.com.

The public advertising campaign was launched, in April, with a one-month bus banner campaign, administered by Pattison Outdoor Advertising, which saw our message, “We don’t need a king. Our next head of state should be Canadian.’ prominently displayed on the sides of 6 TTC buses, crisscrossing the GTA. 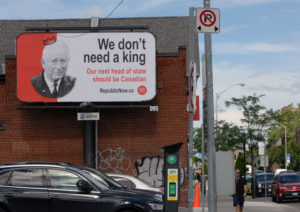 The billboard campaign, administered by Astral Out of Home media, ran for four weeks, starting on Jun. 19, and our billboards were up during the celebration of Canada’s 150th birthday, as well as during the Canadian visit of Charles Windsor. 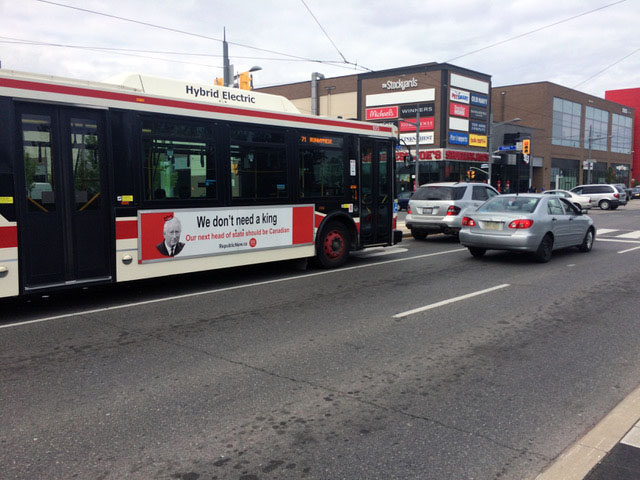 The Ottawa billboard was seen by staff of the parliament office of Senator Serge Joyal and this sighting resulted in a request, from the senator, for a reproduction of the billboard image, for inclusion in the senator’s archival collection of materials relating to the British monarchy’s presence in Canada. I made the presentation, in person, as a representative of Republic Now, and had the opportunity to speak to Senator Joyal. In addition to the reproduction of the billboard design I also gave him a media package outlining Republic Now’s objective in launching the No King Charles campaign.

Wayne Adam, as Media Director, was very active in issuing media releases at key points in our campaign. 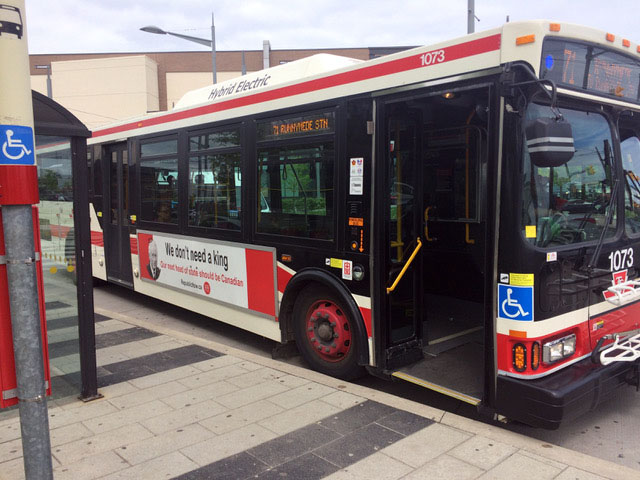 Bob Hepburn, of The Toronto Star, took note and expressed his interest in writing about the No King Charles campaign. As it happened, his intention to have a story in a Victoria Day edition of The Star was preempted by coverage of the Manchester terror attack. Mr. Hepburn exchanged emails with Wayne and myself and remains interested in our work.

After Randall White and I were interviewed by writer, Joshua Oliver, we received coverage of our organization and the campaign, in July, in the online edition of Walrus Magazine. Mr. Oliver also expressed his interest in staying informed in regards to Republic Now activities.